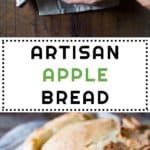 Step by step tutorial with photos for a fool-proof homemade apple yeast bread made with fresh apples. The best bread you’ll ever try! 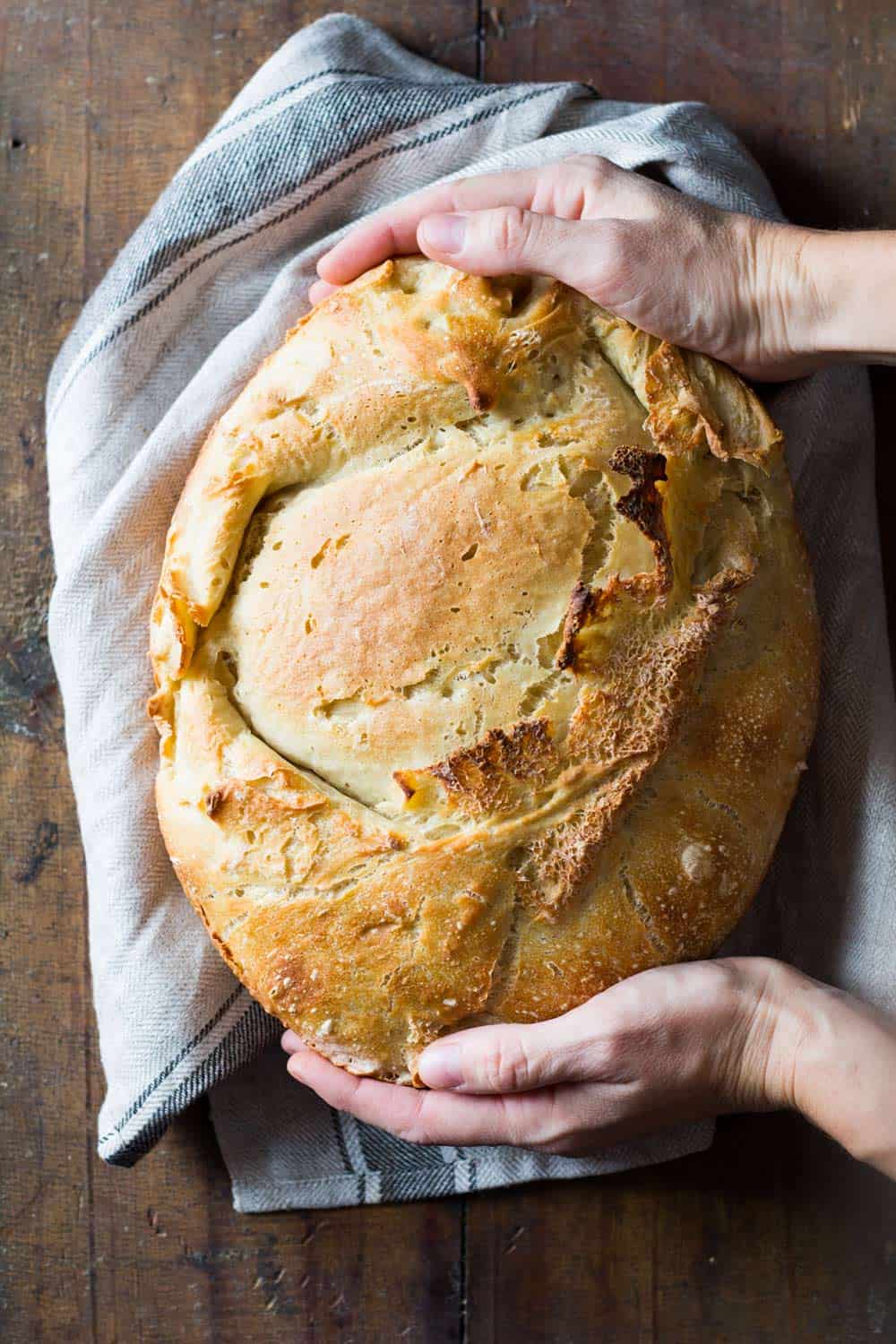 Most apple bread recipes are made with simply baking powder and the consistency is, um, no, just NO! It’s not like bread!! It’s like banana bread but not as good. Banana bread can be a dessert and “caky” (is that a word). Apple bread should be a “real” bread though in my opinion. A yeast bread!

Let’s get to the step-by-step instructions here:

Mix the necessary ingredients and leave at room temperature for at least 12 hours. Let the yeast do its magic.

After 12 hours of leaving the flour and proofed yeast in a bowl covered with a kitchen towel at room temperature, it should look like this (if it doesn’t you didn’t proof your yeast, naughty you!). 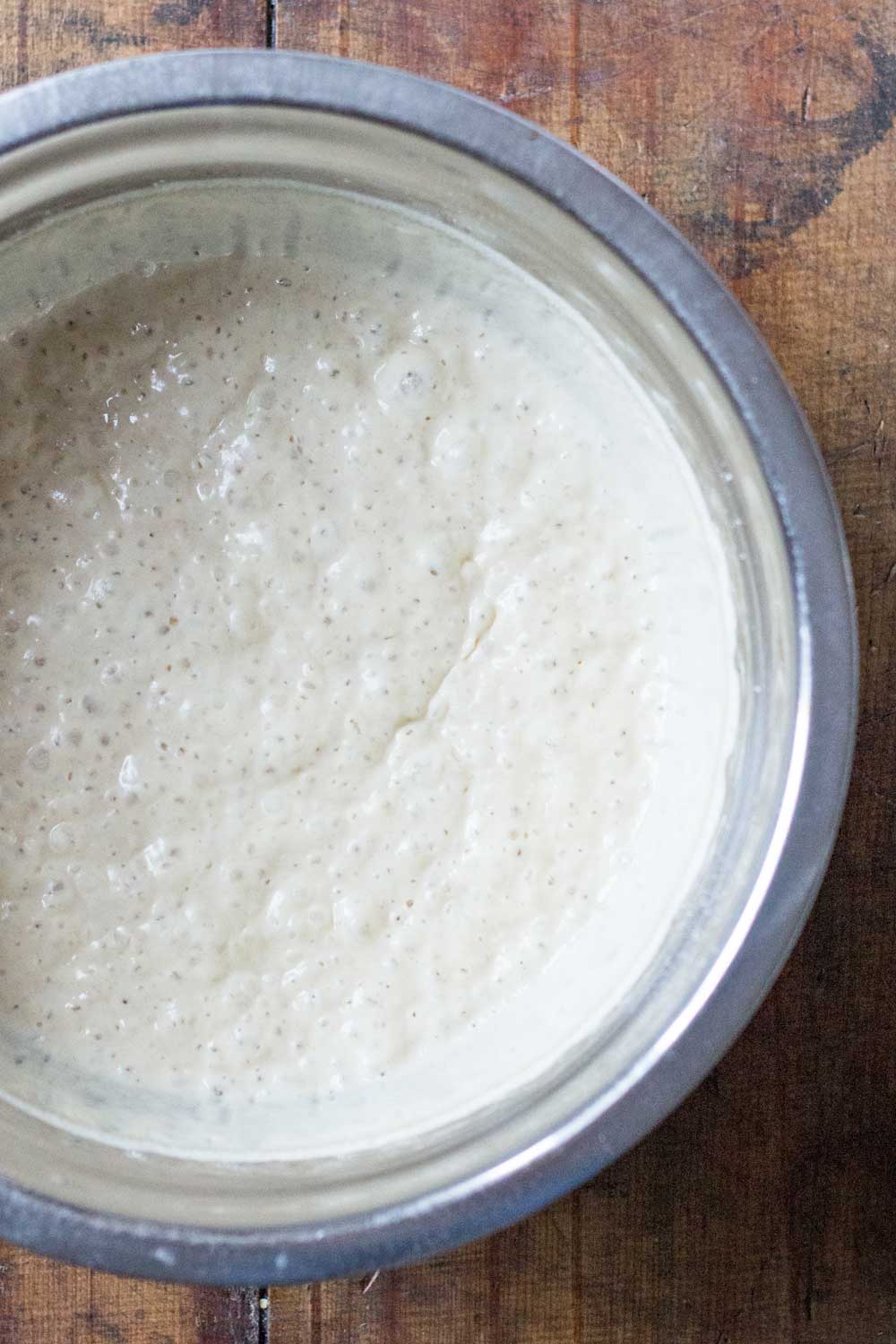 Make it an “Artisan Bread”

Artisan yeast apple bread requires several rises. This specific bread calls for a 12-hour rise of the starter and then two 45-minute rises.

Remember, you don’t have to do anything at all while the bread is rising. Making bread is a long process BUT only requires a couple of minutes of actual work in between rising/resting time. In total, you put in maybe 10 minutes of active work here.

Use a stand mixer to knead the starter and rest of ingredients with a dough hook attached for a good 20 minutes on low. This is so the gluten is activated. You can’t do this by hand. The dough is too sticky and also, you’d need a bodybuilder’s muscle to make it through 20 minutes of kneading. If you don’t have a stand mixer ask around and borrow one from a friend.

The dough should end up very sticky and elastic (left photo). Cover it with a clean kitchen towel and let rise at room temperature for 45 minutes or until the dough has doubled in size (right photo). 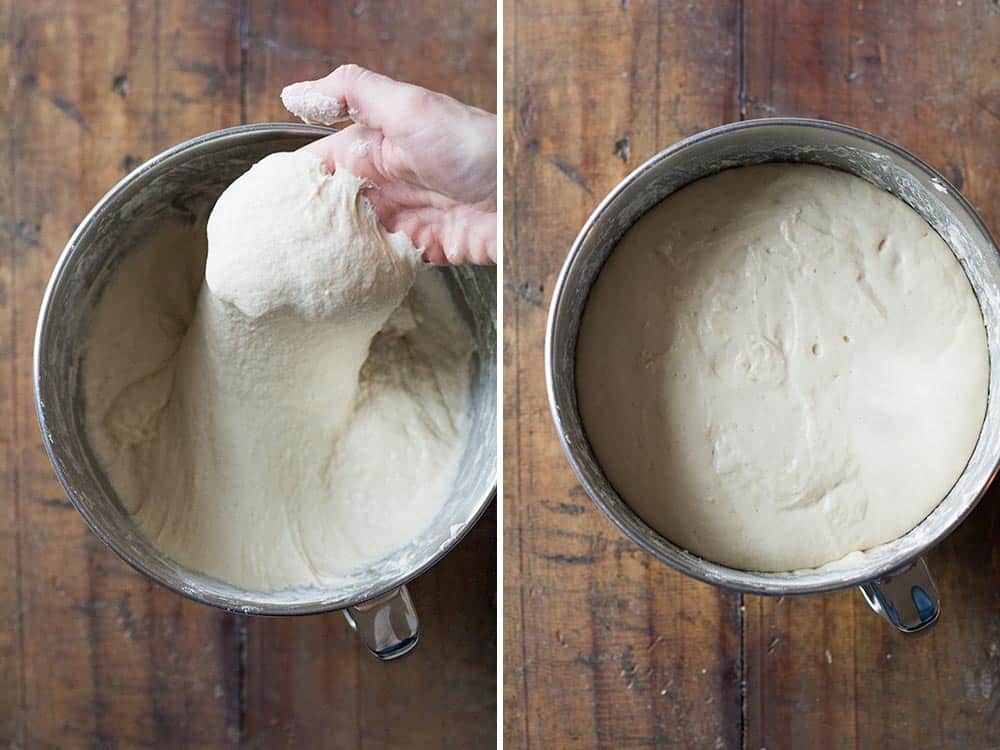 When and how to add fresh apples to the bread dough

After the first rise, it’s time to fold in the fresh apples.

I recommend adding the apples this late in the process to avoid fermentation. If you add the apples in earlier it will ferment and make the dough pretty sour. I wonder also if the dough would even rise the first time due to the weight of the apples. It’s best to let the dough rise first, then add apples, then let it rise again.

Add apples and fold and fold until well combined. By then the dough reduced in size again. Tadaaa, the photos for how to add fresh apples to healthy apple bread: 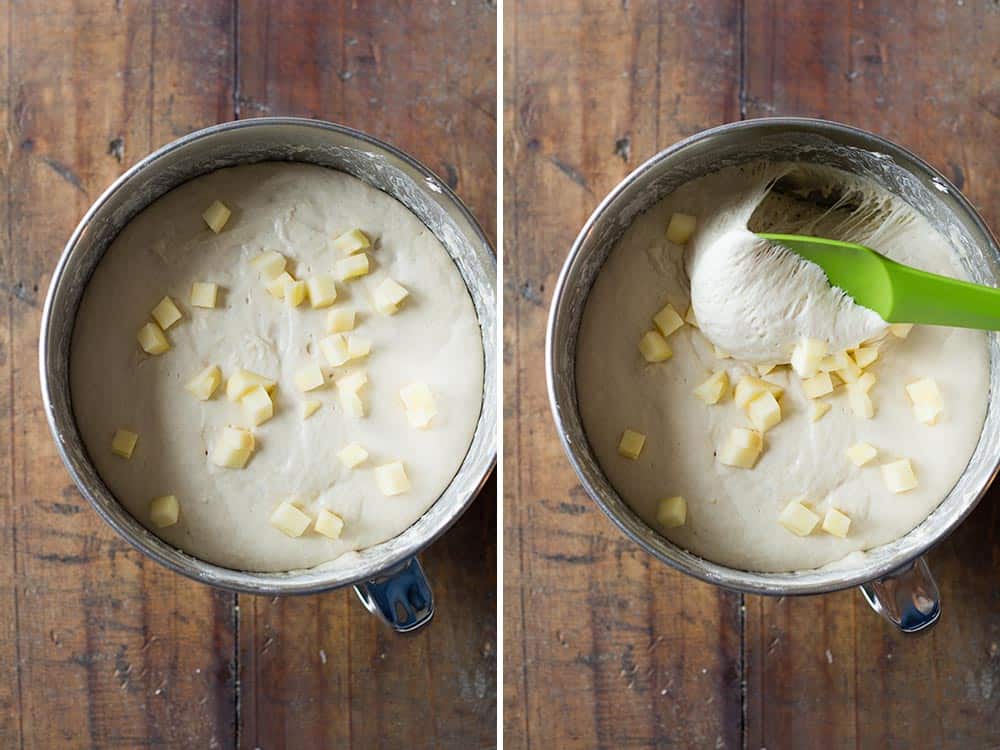 You can leave the dough in the same bowl for the second rise but I prefer dumping it into another parchment paper-lined bowl for easier and risk-free transfer into the burning hot dutch oven later.

Anyway. I dump it into a parchment paper-lined bowl, cover with the kitchen towel again and let it rise a second time for about 45 minutes. 15 minutes into the second rise I turn on the oven with the dutch oven inside for it to heat up properly. 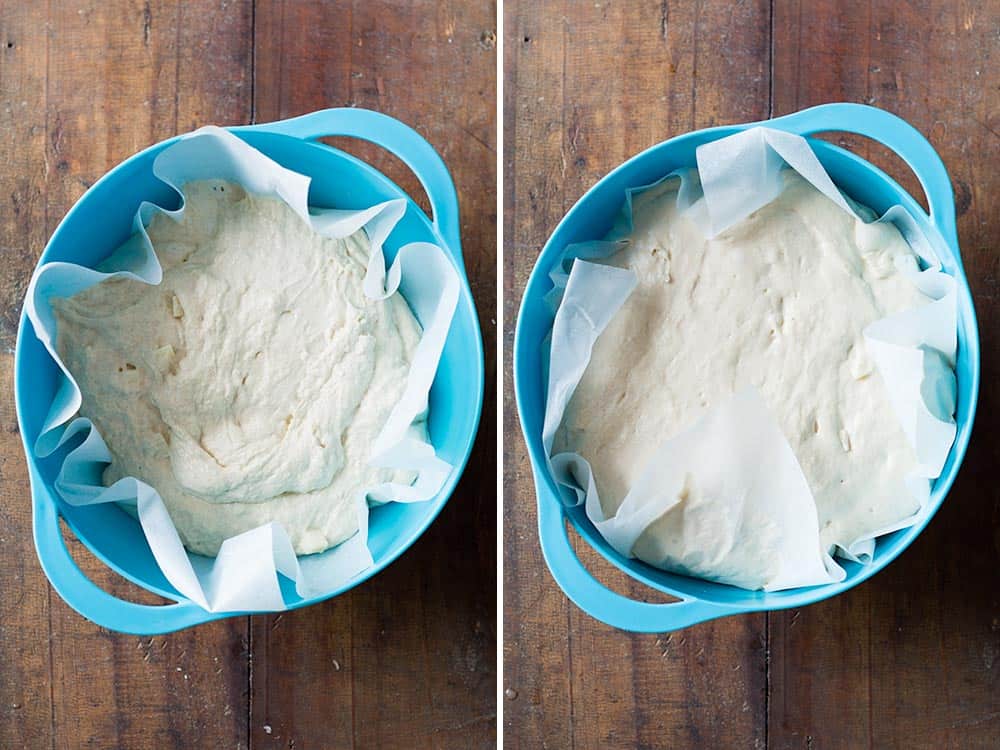 Dutch oven vs. no dutch oven when making bread

There are two reasons apple yeast bread or any yeast bread really will form a dome. One, the bread dough is given enough opportunities to rise. Two, the bread dough is baked in strong heat coming from all directions. Most of us have regular ovens. Heat from the top and heat from the bottom. That’s it. Regular home ovens do not emit heat from all around. Bakeries have special ovens. Many of their ovens are stone ovens where the stone retains all the heat and radiates it back to the whole surface of the bread.

The only way to “imitate” this is by using a dutch oven. I’ve tried with a oven-proof stainless steel pot with oven-proof glass lid and … it doesn’t work. Stainless steel doesn’t “store” heat. It becomes hot, yes, but as soon as you take it out of the oven to dump in the bread dough, it immediately starts cooling down. A cast-iron pot keeps the heat for muuuuch longer. Enough time for you to dump in the dough, put the lid back on and transfer back in the oven without it cooling down even 1 degree.

Now, if you don’t have a dutch oven, don’t go run and buy one. They are quite pricey. Ask around if someone can borrow you theirs (<- that’s what I did by the way. Thank you Sophie! :) OR if nobody can borrow you one just use your cast iron pan (I’ve done that before with this No-Knead Bread). If you don’t have either, use a baking sheet. Your bread will not produce a beautiful dome. It will for sure still taste absolutely amazing though. 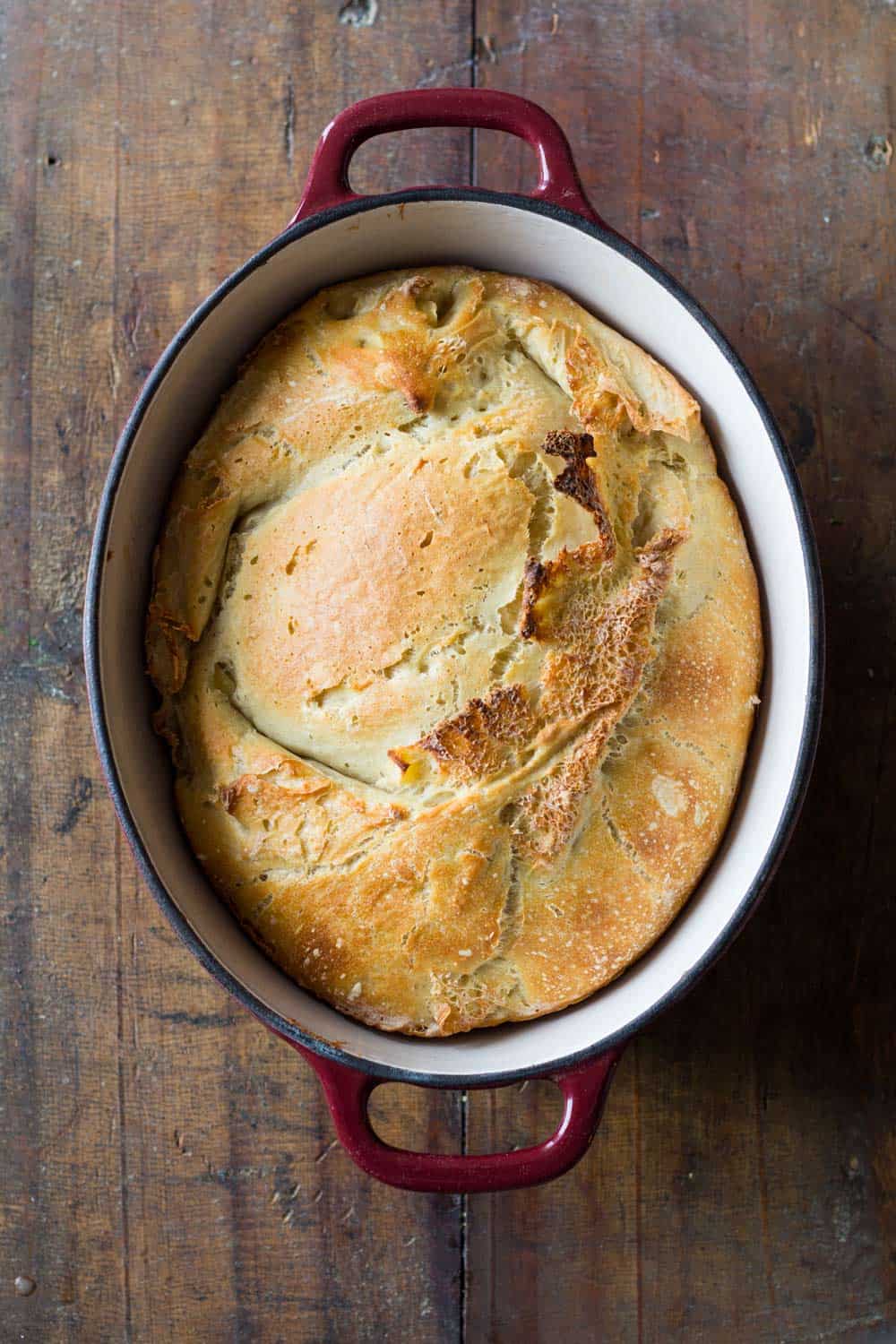 This point is also very important. Once the apple yeast bread is baked you have to remove it from the dutch oven (carefully, remember it’s hot!). Since the dutch oven retains a lot of heat for an extended amount of time it’s crucial to remove the bread so it doesn’t continue baking. Otherwise it will become very hard. Turn the dutch oven over so the apple bread falls out. It will immediately and easily fall out. There is no way bread dough will stick to a burning hot cast iron pot or pan. If it sticks, you didn’t heat it up enough time (as I suggested further up) naughty you ;)

Place the freshly baked bread on a cooling rack and wait for it to COMPLETELY cool down before cutting into it. If you cut into hot bread all the steam escapes and the center stays “doughy”. The bread needs to cool down slowly for the steam to do it’s work on the inside of the apple yeast bread.

How to store Yeast Bread

It’s time to finally, finally break apart a piece of this masterpiece of a healthy apple bread. 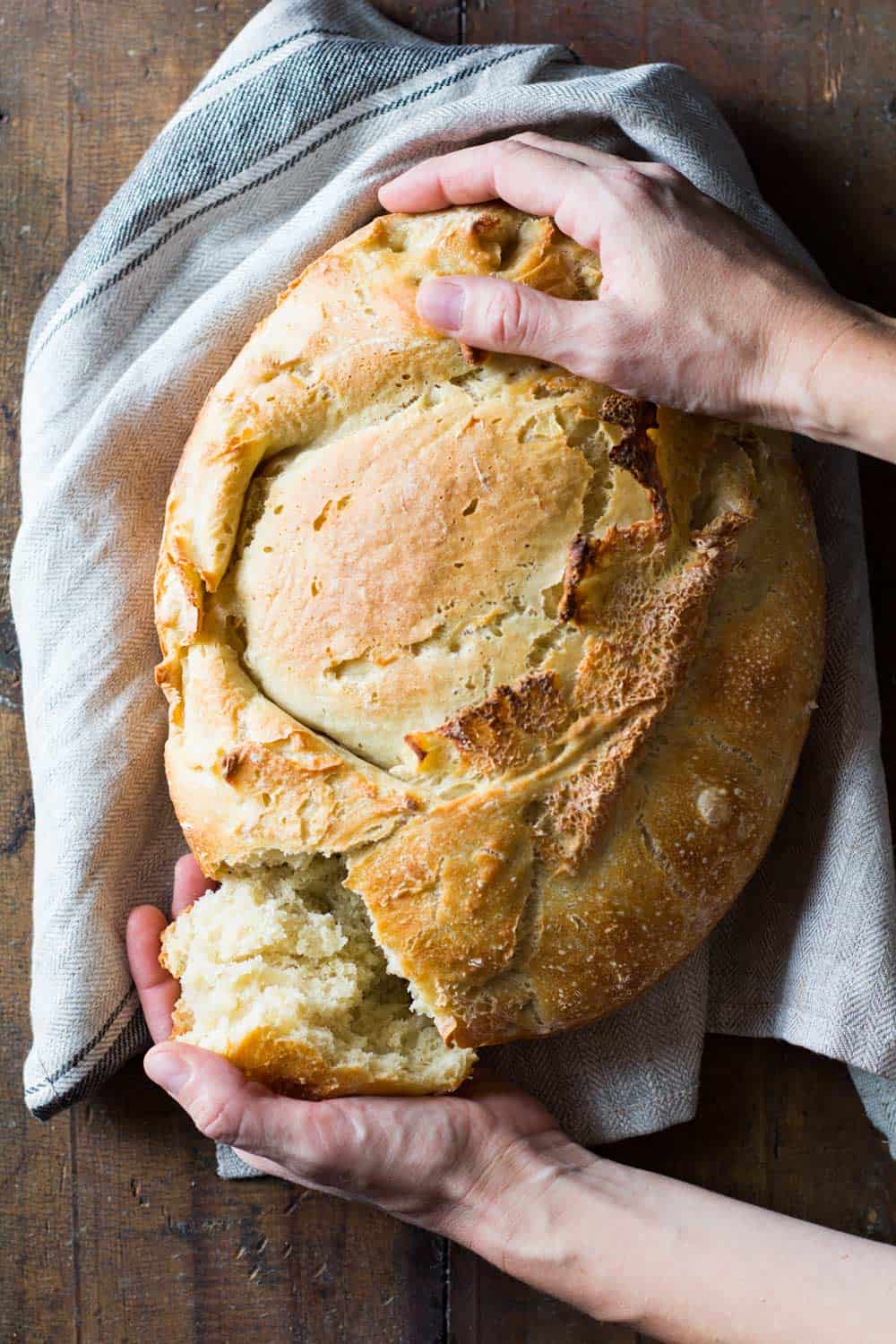 Don’t use a knife. Use your hands. Eat an uneven piece. It tastes so much better that way. Eat your first piece just like that. You can eat the second with butter or dunked into butternut squash soup. Eat the first piece just plain.

Once you ate all you could eat it’s time to store it. Put it in a paper bag and leave on the kitchen counter if you’ll finish it the same day. OR place in a paper bag and then plastic bag and place in the fridge. Since this Apple Yeast Bread contains fresh apples it shouldn’t be stored on the kitchen counter for too many days. Store it in the fridge from day 2 onward.

Phew. Are you ready to make bread now? 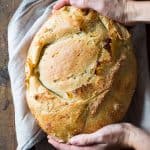 Prep Time: 10 minutes
Cook Time: 40 minutes
Total Time: 14 hours 50 minutes
Servings: 10 people
This is one of the most delicious breads I have baked so far. An Apple Yeast Bread is BY FAR the best bread in the world. Homemade and with fresh apples brings it to another level. O EM GEEE!!
Print Recipe Pin Recipe